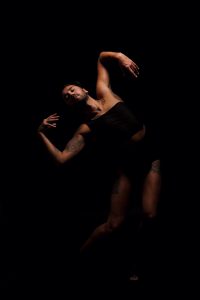 Patryk Rożniecki is a choreographer, dancer and teacher. He’s been dancing since he was a child, systematically gaining dance experience at dance schools all over the world, mainly in Los Angeles, Kopenhagen, Paris and London. Finalist of the second edition of You Can Dance in Poland, which gave him a chance to work with the stars of the European music scene and test his dancing skills in theatre. In his artistic output he has participated in performances such as: “Phantom of the Opera”, “La Cage aux Folles” and “Chopin Must Die”. His background is Hip Hop and modern jazz, in which he has a diploma in.

He devoted the last few years to promoting the High Heels style, which he became a precursor of in Poland. On a daily basis, he works with artists, takes part in the production of the Top Model program as a heels trainer and shares his passion with students all over the world, also in Australia where he teaches regularly.

He is expressive, full of emotions and cares about authentic expression and body language more than anything. His classes are not only about dancing movements but also about being truly yourself and loving it. He’s doing his best to transfer his knowledge and experience into his students.